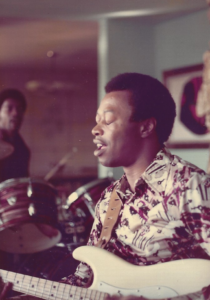 “The one thing that can bring us together”

August 30, 2016, Los Angeles, CA:  Music legend Charles Wright releases his classic song “Comment” as a social video platform to express his concerns with the societal dysfunctions plaguing communities world-wide.  “Comment,” back in 1968, discussed the state of racial affairs in America.  Sampled by at least ten other artists; including Ray Charles, Les MCcann, Amanda Ambrose, Wilco and others, “Comment’s” lyrics are even more relevant today than they were back in the day.

With the release of Wright’s 1st biographical book “Up From Where We’ve Come” (the true story of racial and economic discourse his family endured as sharecroppers, which led to the term “A Sharecropper’s Mentality,”) as well as his new CD, “Something To Make You Feel Good,” it is no doubt Mr. Wright has an important message to express.

“I originally started out writing this song to my band members, whom I’d taken from a group of starving musicians, to the Pinnacle of popularity. But for some suicidal reason, they decided to self-destruct, so this was an effort to appeal to their lack of common sense. In fact, the guy upon the hill, which I refer to in the epilogue is none other than me, myself and I.

My band members were afraid I was going to up and leave them, which was the absolute last thing on my mind. Yet, they were doing practically everything they could in an effort to hold me hostage.  But while I was writing the song I came to realize, it didn’t simply address the issues concerning my band. The scenario was also a perfect fit for the American society as well. And though I wrote it years ago, it is still as relevant today as ever.

“I want to reach everyone!”  Wright continues, “We have to have a voice and perhaps through video images, the viewers cannot simply hear the words, but see the powerful images, which we too often take for granted.”

These images are explosive and cannot be denied.  Police who murder African Americans yet remain on paid leave until found not guilty; African Americans jail sentences way beyond the crimes committed, or committed while Whites get off easy; the rise of gang violence and homelessness in practically all communities; so Wright simply ask us, “What about me!”

With the social climates of digital marketing, Charles Wright has tuned into the vast ways of distributing the content of his musical videos.  #WhatAboutMe is social consciousness that hopefully, will touch each and every heart.  For it is essential to look into ourselves and question our surroundings. Then, focus on where we stand as individuals, while we seek self-improvement. It is only when we see ourselves for who we truly are, that we can change the environment inwhich we live. Once this is done, we will discover how “Equal Justice” is the one thing that can bring us all closer together.

Please feature this important social video.  Share the video to your networks, to your celebrity friends and media outlets with the hashtag #WhatAboutMe

Fans and historians can stay updated on all the latest news by following Charles Wright:

Best known as the leader of `70s soul group The Watts 103rd Street Rhythm Band and the composer of the resourcefully recycled R&B smash “Express Yourself,” Charles Wright has evolved into a tireless watchdog of African American history. Mr. Wright is author of the richly engrossing “Up From Where We’ve Come”: his first in a 3-part series of autobiographies – this one detailing his childhood in a family of. This 2016 release is available as a physical book, a digital download and an audio book.

Charles Wright was born and raised near Clarksdale, Mississippi. After his family moved to Los Angeles, Charles discovered music at Manual Arts High School, shortly after taking up singing, songwriting and playing guitar. He worked a few manual labor jobs including the pressing plant at Top Records before singing in doo-wop groups The Twilighters, The Galahads and The Shields [which also included Jesse Belvin with Johnny “Guitar” Watson accompanying, who scored a hit with “You Cheated” (#11 R&B / #12 Pop)]. Charles was briefly A&R Director at Del-Fi Records where he co-produced the1961 hit “Those Oldies but Goodies (Remind Me of You)” by Little Caesar and the Romans.

Charles’ and the band’s best known number is the international crossover smash “Express Yourself” (#3 R&B / #12 Pop), written, arranged and sung by Charles. Since the Summer of `70, the Grammy-nominated song has enjoyed a long and lucrative life for Wright; sampled by many rap artists (including groundbreaking “Straight Outta Compton” gangster rappers N.W.A); utilized in dozens of commercials for everything from Burger King fast food in America to Bitburger beer in Germany; used in many movies (including “Mr. & Mrs. Smith”); and, in sports, has been used by the PGA, the Summer Olympics and the NBA. Wright also re-arranged “Express Yourself” for a public service campaign as “Protect Yourself,” a message to youth to use condoms that he performed at the first “AIDS Walk Circle of Life Concert.”

1969’s “Do Your Thing” (a masterful edit of a jam recorded live at the Haunted House club in Hollywood in 1967), was memorably utilized in the 1997 film “Boogie Nights” (set in the 1977 world of big screen XXX-rated movie making).

Charles Wright recorded five LPs with the band and one solo LP for Warner Bros. (Poetry & Rhythm – 1972) followed by three for ABC-Dunhill. In the `90s, Wright started his own label, A Million Dollars’ Worth of Memories Records, through which he has released ten CDs. The 2014 CD Let’s Make Love Tonight featured the single/video “I’ll Give You Time.” His latest CD, Something to Make You Feel Good, was released in spring of 2016 featuring the single/video “She Don’t Believe In Love” as well as the pre-release video “Looking For an Ugly Woman.” The company also released the concert DVD “Live at The Ford Theater.”

The video department of Charles’ company produced a documentary, “Bring Back the Harmony,” which follows Wright in his quest to return music education to the school system. It also produced 30 half-hour episodes of an interview show entitled “Express Yourself” showcasing the lives and careers of celebrities from rock and roll pioneer Little Richard to Hollywood actor James McEachin.

Still going strong, Charles possesses a wealth of knowledge, experience and anecdotes – humorous to profound – that make him a compelling personality for interviews, panels and multi-media platforms. And with his book “Up From Where We’ve Come” generating strong responses from those that have read it, it’s proven his perspectives hold great value with the community at large.

Keep up with Charles Wright’s latest opinions and accomplishments at the internet destinations below.